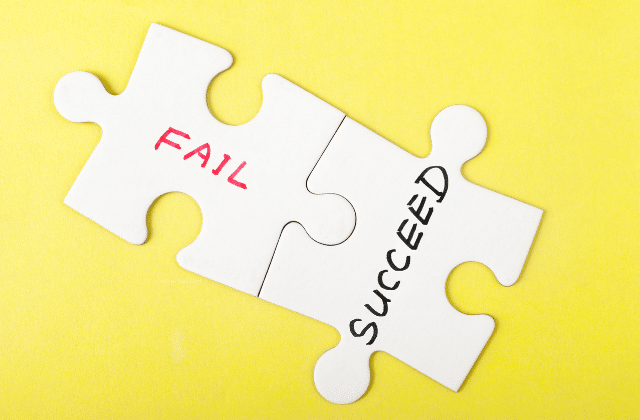 Failure is a funny thing

It’s something that is a barrier to success for many people because it’s seen as something to avoid (at all costs).

I’m sure you’ve heard that phrase before. The trouble is failure is often the only way to achieve success.

Let me give you an example…

I’m currently in a black hole of nothingness regarding the gym.  Yes, they’re currently closed but that’s no excuse.  I have the space; I have the time and I could just use my kit and train.

And the horrible thing is that my diet hasn’t changed.  Now this means I’m losing weight and more accurately, losing hard earned muscle mass and it’s driving me nuts.  My nutrition and training demands are linked so when one slips, my body reacts. I must keep training to stay at my “fighting” weight.

I think it’s because of two things.  One, I just know that it’s going to hurt and two, I’ve broken the habit.

I know that once I start, I’ll keep going but, like diving into Clubhouse, that scares me a little.

Why?  Because when I train, I train to deliberate failure.  For the goals I want, I push my body beyond what I think it’s capable of and demand more.

The whole principle of weight work is to break down muscle fibres, putting them under enough strain that they fail.

The more you fail, the more your body creates denser fibre to cope the next time you do it.  As I’m not training, as I’m not straining my body, it’s not prioritising muscle fibre growth so I’m losing muscle.

Basically, to succeed with the weight and strength goals I want, I must fail.  And I need to embrace that failure.  Every session I design has one purpose.  Create a point of failure.

My planning is designed to create failure.

In Pursuit of Failure

Understanding that failure is part of growth, is something to look forward to, and something to actively pursue, is vital if you want to succeed.  In business, you need to look for those moments of failure (the processes that don’t work, the tech that lets you down) and find improvements.  If they don’t break, you never get to fix them and fixing things gives you a chance for improvement.

We’re so afraid of getting things wrongs that we never give ourselves the opportunity to learn from mistakes as we don’t make mistakes fast enough or often enough.

Being afraid of failing rather than recognising that it’s part of the success process is a sticking point you must get past if you want that success.

Now, I’m going to train this afternoon, to failure.  It will hurt tomorrow and DOMS will mean it will hurt more the day afterwards but that feeling will remind me that I’m succeeding.  Without it, I’m just going through the motions…

What are you going to fail at today?