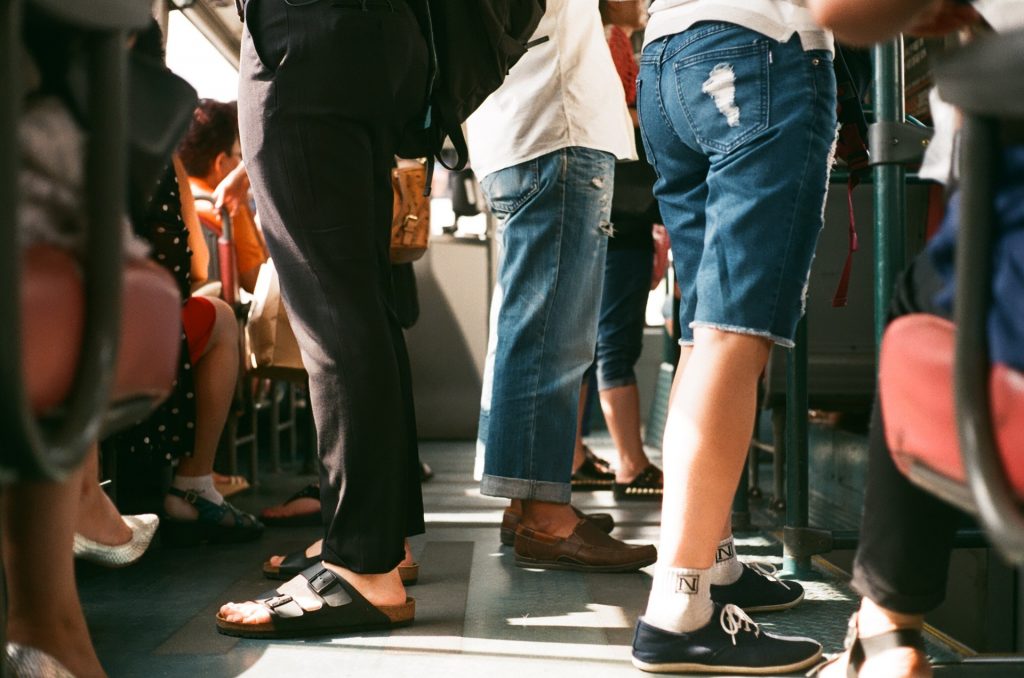 The London Underground is a funny place, especially at rush hour.

It’s full of people, head down rushing from place to place, minding their own business, and not talking to each other. Smiling at someone gets you a frown and trying to start a conversation sets off the “oh no, he’s a nutter” alarm bells.

The train can be the same. Kay commutes to London every day on the Chiltern Line from Gerrards Cross to Marylebone. Whilst I often do the same I usually use the Central Line from South Ruislip.

I do this especially when I travel in to watch QPR. I do this because there have been occasions (on the rare times we’ve won) I may have missed my stop home on the train. This means Kay driving to random places late at night. Places like Saunderton or Princes Risborough to pick me up, when my phone has inevitably run out of charge.

A few weeks back Kay and I were travelling to London for a speaking event.. The train was crowded as Spurs were playing at Wembley. We found a spot to stand. Next to us is a youngish looking chap. He’s suited and booted having a conversation on the phone in a broad Glaswegian accent.

Until he stops his conversation. He looks at his phone, looks at us, smiles (breaking rule #1) and then proceeds to asks us if we know how to get to Tower Hill. This is obviously breaking rule #2, however as he’s asking for directions, he could be forgiven.

Kay is a helpful soul and incredibly knowledgeable about London’s transport system. She spent the best part of 20 years commuting. “Get off at Marylebone. Get the Bakerloo Line to Embankment and then the Circle or District Line to Tower Hill”. I’ve just had to look that up to check.

He looks at her blankly.

“We’re going in that direction for most of the journey, so we’ll show you”. I don’t know if we’ve broken another rule here by letting him travel with us.

We get talking and it turns out that this is Tony’s (real name) fourth visit to London. The first was for a training trip with his (old) job. The second was to look for a place to live. The third was when he moved in and this was his first week at work. The company he works for is in London, but their training centre is in Gerrards cross, which is why he was on the train.

We get talking some more and I ask the fateful question…

It turns out that Tony or Boon as we come to call him is a mahoosive (his word) Glasgow Celtic fan. He even has a Celtic wallet. We really get chatting at this point.

Tony has come to London, on his own to discover the bright lights. He feels there aren’t enough opportunities for him in Glasgow. It’s a pattern that’s been repeated all over the world.

Tony’s left Glasgow, his family and friends and his beloved Glasgow Celtic to start this new life. Apart from a couple of people in his new job, he doesn’t have any connections here.

Inevitably we start talking about football. My love of QPR striking a chord with him (Kay’s reading a book at this point) and it’s clear that we’ve connected in a great way.

I suggest to Tony that we connect on LinkedIn and that I’ll get him a ticket for our next home game on the weekend.

He’s blown away by this offer and I suspect, sceptical at the same time. Why would someone you’ve randomly met on a train into London, offer to take you to a football match when you barely know them?

Here’s the first point of this article. On London’s public transport, we’re so busy hiding behind our newspapers and kindles that we’ve forgotten how to talk to each other. It’s the same in business. We spend so much of our time devising new ways to hide, using tools like email or bots, or getting other people to manage our social media for us.

Nothing beats talking to someone.

Back to Tony. I did connect with him on LinkedIn and we exchanged phone numbers. As I said to him, “let’s take this off LinkedIn and into the real world”. A week later he’s standing next to me at Loftus Road Stadium singing his heart out with the rest of us. He’s getting involved, enjoying his passion for football and enjoying a 1-0 against the top team in the Championship.

You see, I followed up, and more importantly, I said what I meant, and I meant what I said. I offered him a ticket, and I meant it. Which means I got him one. He met the guys. He got involved in the banter. They thoroughly respected his passion for football and willingness to get involved with all that entails.

It doesn’t matter that he’s a Celtic fan. Now, while he’s in London, he’s a QPR fan. He’s part of the tribe, the community. He buys a round.

You see, getting out, talking to people helps you build relationships.

I know that this story isn’t in a business context, but I can’t help but feel that many of us are missing that from our marketing and sales strategies.

It’s easy to send emails, it’s easy to set up systems that talk to people for you. It’s easy to say you’ll call someone after a networking meeting or chance encounter. What matters is that you follow up on it. You act. You deliver on your implied promises and you start the process of building a relationship.

Tony loved his day out. He loved it so much that he jumped at the chance to come to Nottingham Forest away (lost 4-0) and there’s a good chance he’ll come to Munich with us next year. He’s in, he’s bought into us and we’ve bought into him.

That day, QPR got a new fan, we made a new friend and he has greater sense of belonging than before that train journey.

On another day, it could be a new client or customer. Get out there, speak to people, you never know what could happen.

As the old BT advert used to say… “It’s good to talk”.

Don’t ditch your plan too soon.